Filipinos & Vietnamese Are the Likeliest Pet Owners During the Pandemic

We could all probably reach a consensus on how the global pandemic has been a true test of sanity.

With two years of restrictions and isolation, it is no surprise that there’s been a staggering increase in depression and anxiety during the pandemic.

Thus, people are scrambling to find anything to cope with. And this includes getting furry friends.

Hence, Southeast Asia’s leading e-commerce aggregator, iPrice Group, conducted a study on the region’s increasing demand for pets in six Southeast Asian countries. They discovered that the region’s Google search interests for pets (either for adoption or for sale) have increased by a whopping 88%.

Filipinos’ Interest in Pets Accounts for 53% of the Region’s

Comparing January to September 2021 with the same period in 2019, Filipinos’ searches for pets have increased by 118%. They have the highest increase in the region, along with Malaysians.

Meanwhile, it seems that Vietnam has the lowest increase (34%) despite their abundant Google searches for pets, rising only by over a third of 2019 numbers this year. This could be due to the fact that Vietnam’s COVID cases only spiked in the recent months, starting from July.

Interestingly, Singapore’s interest in pets was highest in 2020 and slightly decreased by 7% in 2021. This could be due to Singapore’s loosened restrictions in 2021 compared to the previous year, as they toy with the idea of reaching the endemic stage.

iPrice observed that there are direct correlations between the demand for pets and the gravity of COVID infections/government restrictions in the countries. 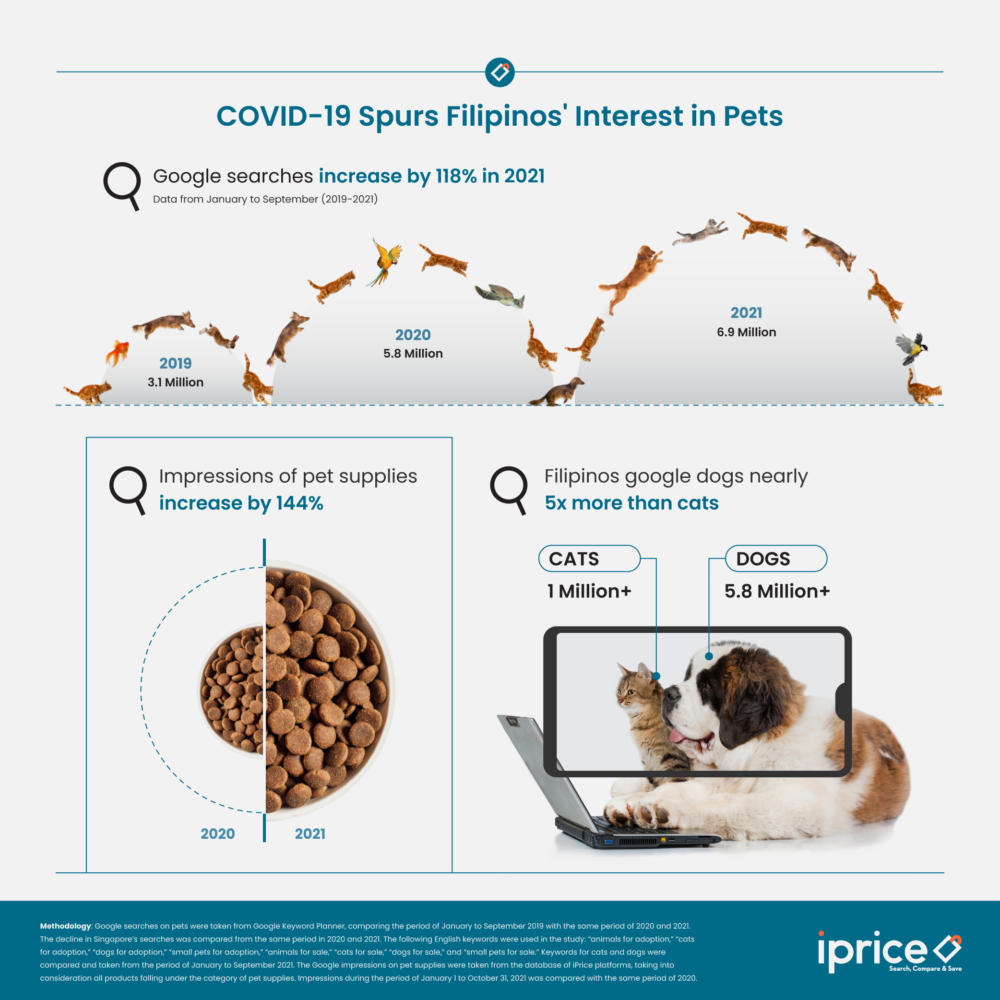 It makes complete sense that the demand for pet supplies has also increased this year. According to iPrice’s database, the Google impressions on their category for pet supplies have increased by 158% across all their six platforms in Southeast Asia. The period of January to October 2021 was compared with the same period of the previous year.

Impressions on iPrice Philippines’ pet supplies have more than doubled, from over 400k the previous year to over a million this year. The rise in pet adoptions and purchases is evidently good for pet stores.

iPrice’s platform in Thailand leads with the highest increase of impressions on pet supplies (4.5x more than the previous year), followed by their Malaysia platform (increasing by nearly 3.5x more). This is probably due to both countries’ alarming rise of COVID-19 cases in the previous months after containing them so well last year. As a result, both countries saw a rise in suicide cases this year, which is a telltale sign that there is a need for coping methods.

Moreover, the rise in COVID cases resulted in more movement restrictions in both countries, which led people to shop more online than buying pet supplies in physical stores.

Meanwhile, iPrice’s Vietnam platform comes in third, with a 220% increase in impressions on pet supplies. It more than tripled from last year’s numbers. Just like the former countries, Vietnam has encountered more difficulties in containing the virus this year than in 2020.

Indonesia, on the other hand, had the lowest increase (89%) of impressions.

With cats and dogs being the mainstream type of pets, iPrice found out which among the two were more popular in Southeast Asia.

Although there are numerous anecdotal online debates and memes about the dog lover-cat lover rivalry, the former outnumber the latter by a landslide.

That said, it’s important for people to keep their minds in check as the region still cycles between looser restrictions and lockdowns due to the unpredictable nature of the virus, even if this means spending time and money on a beloved pet. It may just be worth it.

How to Attain Effective Hair Growth?

How What You Eat and Drink Can Affect Your Skin