Impact DOCS recognizes film, television, videography, and new media professionals who demonstrate exceptional achievement in craft and creativity and those who produce standout entertainment or contribute to profound social change. Documentaries were received from 30 countries, including veteran award-winning filmmakers and fresh new talent. Entries were judged by highly qualified and Award-winning professionals in the film and television industry. 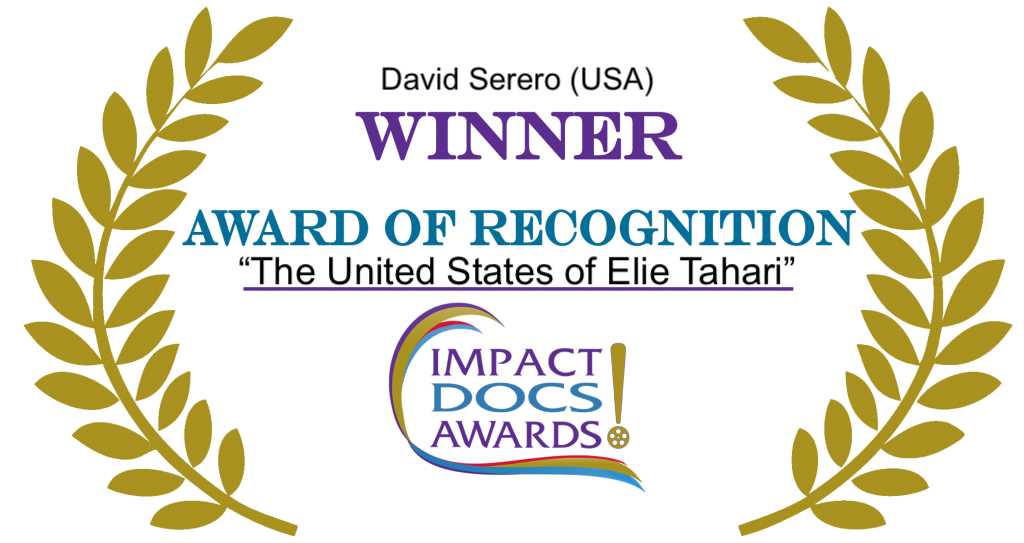 In winning an Impact DOCS award, David Serero joins the ranks of other high-profile winners of this internationally respected Award including the Oscar-winning director Louie Psihoyos for his 2016 Best of Show – Racing Extinction, Oscar winner Yael Melamede for (Dis)Honesty – The Truth About Lies, and Emmy Award winner Gerald Rafshoon for Endless Corridors narrated by Oscar winner Jeremy Irons, and many more.

Rick Prickett, who chairs Impact DOCS, had this to say about the latest winners, “The judges and I were simply blown away by the variety and immensely important documentaries we screened. Impact DOCS is not an easy award to win. Entries are received from around the world, from powerhouse companies to remarkable new talent. Impact DOCS helps set the standard for craft and creativity as well as power catalysts for global change. The goal of Impact DOCS is to help winners achieve the recognition they deserve for their dedication and work.”

“The United States of Fashion Designer Elie Tahari,” directed and produced by David Serero, received the Award for “Best Director on a Documentary” by the Berlin Indie Film Festival, “Best Producer Award” by the Eastern Europe International Movie Awards, and received Honorable Mention at the London International Film Festival, 4 awards at the Cinema of the World including Best Feature Documentary and Best Director, and was selected in several film festivals across the world.

Fashion Designer and Mogul Elie Tahari has been living the American Dream for more than 50 years. He came to New York in 1971, from Israel, with less than $100 in his pocket, slept on benches in Central Park, and went on to build a billion-dollar fashion empire. There are thousands of fashion companies worldwide, but only three have lasted for more than 45 years globally and are still run by their founders: Giorgio Armani, Ralph Lauren, and Elie Tahari.

Due to film festivals not opening until 2022, the movie is brought directly to audiences. The film is available for rental at $9.99 on vimeo.com/ondemand/elietahari for 30 days only. Afterward, the film will be reserved for the film festival circuit for at least another season. “I want Elie Tahari’s life to travel in everyone’s heart,” said director-producer David Serero.

The United States of Elie Tahari » is the first documentary ever produced about Elie Tahari, filmed in 2020. Directed & Produced by David Serero, this highly anticipated documentary tells the life of Elie Tahari from his birth and origins (born in Israel with Iranian parents) throughout all of his achievements and legacy. Part of the documentary is also dedicated to Tahari’s creative process and endurance in the fashion world. Several fashion personalities such as Fern Mallis (aka the Godmother of Fashion), Melissa Rivers, Fashion designers Nicole Miller and Dennis Basso, Arthur S. Levine, Wallstreet Journal Fashion Journalist Teri Agins, as well as Disco music, models, Studio 54, and more, are part of this documentary.

The Official Trailer of « The United States of Elie Tahari » is available here:

Impact DOCS Awards is in its second year and is the newest member of the Global Film Awards (GFA) family of competitions hosting competitions for 14 years. GFA set the standard for this exciting new breed of film competitions. MovieMagazine named GFA’s Accolade Competition “…as one of the top 25 festivals worth the entry fee”. It is truly international in scope, offering filmmakers from large powerhouses like Disney, The Weinstein Company, Discovery, and Ridley Scott to first-time filmmakers and students the opportunity to receive valuable feedback from an impartial judging panel comprised of highly qualified and Award-winning professionals in the industry. Often the first stop on the festival circuit, GFA award winners have gone on to win Oscars like the short doc “The Lady in Number Six” and “Mr. Hublot” and countless Emmys, Tellys, and more. www.ImpactDocsAwards.com

Ingredients To Look For In A Skin Lightening Product